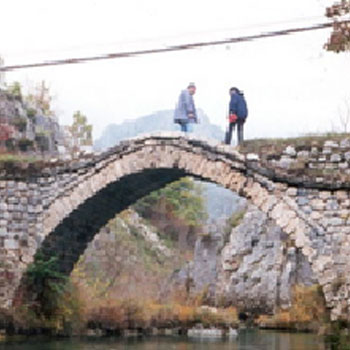 Roman bridge in Vučija is a great secrecy like all old bridges whose erection is attributed to the Turks or the Austrians, or even the Romans. The Roman bridge in Vučija is the most interesting and seemingly the oldest. It was probably built when the Lastva towers. The old bridge on the Sušica in Vučija is located between two large rocks and it joins two steep parts beneath the river. The bridge used to be called the Old Bridge, Greek Bridge, the bridge on the Sušica, while the inhabitants outside Vučije call it Vučije bridge. It was built of cut stone with upper arches of siga.

Vaulting made of siga is connected by semicircular arches, thus it gives a very nice impression and nicely fits into the ambience. In Roman times, here a road from Dubrovnik headed to Montenegro. This bridge is thought to have been raised in the 13th century. The legend has it that during the reign of Queen Kuljača, there stood the same bridge on the Zaslapnica, some 200 m downriver, but taken away by rising water.