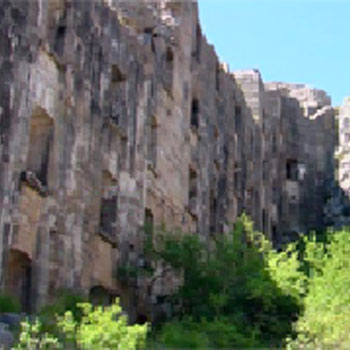 Trebinje is surrounded by former Austrian military forts. One of many, the story tells, is Strač Fort above Trebinje, the second largest in the Balkans. Strač is located southeast of Trebinje. It can be reached by car following the old Austrian road which leads from the hill Crkvina to the village of Rapti, and then turning right from Rapti some 2 km ahead, a miracle of engineering both in those and present times is tucked away at the hilltop. It is said that Strač used to have 365 rooms with walls one meter or even more thick.

All the rooms were interconnected, had fresh air system and water supply enabled by using rainwater from huge pump stations built within the fortress. On top of the fort there are iron cupolas with a wall thickness of more than 30 cm. From this fort, a breathtaking view stretches across Zupci, Peter’s field, Trebinje’s forest, Trebinje and even further. Unfortunately, Strač was considerbly damaged after the Second World War.