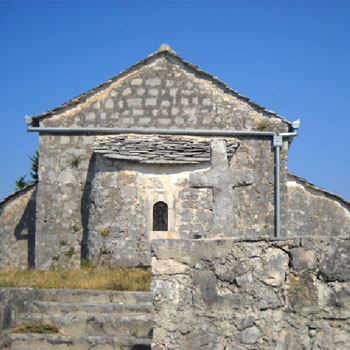 Church of St. Elias in the village of Mesari

St Elias Church at the top of the hill Elias (Elijah’s head) in the village of Mesari, north of the highway Trebinje – Mostar. It is situated on the edge of Popovo field, 20 kilometers west of Trebinje. St. Elias church has trikohnos shape and was repeatedly restored. According to the inscription on the architrave beam, last time it was in 1897. This pre-Romanesque-style church is deemed to have been built in the period from 9th to 11th century. It ranks among the oldest buildings in Herzegovina. The Church of St Elias with prehistoric barrow (tumulus) and a necropolis with tombstones in the village of Mesari was declared a national monument of Bosnia and Herzegovina in 2008.