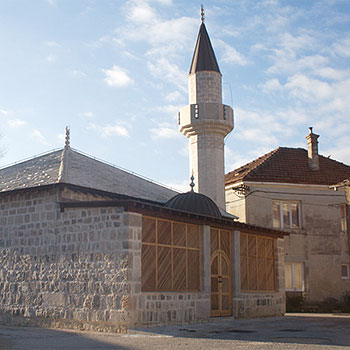 This mosque is located in the Old Town “Castel” not far from the right bank of the Trebišnjica River. It was built of cut stone covered with square hipped roof. Alongside the left wall, an octagnal-shaped stone minaret, 12 meters in height, was erected. It is rectangular in shape and without any architectural value. It was raised by Osman Pasha Resulbegović on behalf and in the name of Sultan Ahmed III in 1719.

It was constructed by Dubrovnik’s stone masons. In its construction there are elements of the Mediterranean architecture. During the last war the mosque was demolished. The foundation stone of its restoration was laid in 2011, and it was inaugurated in August 2014. During the reconstruction, original doorstep was found and is now kept in glass inside it. There is a cemetery with three nišan monuments in the immediate vicinty of the mosque.