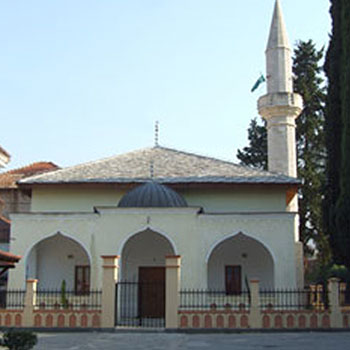 This mosque is located in the Old Town (castle), not far from the main (west) gate and the town walls. It was built of cut stone covered with square-hipped roof to imitate the dome under the fiber-cement roofing panel. Alongside the right wall, the octagonal-shaped stone minaret, 16 meters high, was built and used to be one of Herzegovina most beautiful. It was erected in 1726 and a waqf (endowment) of Osman Pasha Resulbegović. Stone masons were masters from Dubrovnik. In its construction there are elements of Mediterranean architecture. It is regarded as the most spacious mosque in Herzegovina.

Before the war it was declared a protected cultural monument. Osman Pasha erected mekteb and medresa as a related facilities near the mosque. Those were the first educational institutions in Trebinje. During the last war the mosque suffered the worst damage. The cornerstone of restoration was set on 5 May 2001. The mosque was inaugurated on 15 July 2005. Present-day Osman Pasha Mosque is authentic in dimensions and materials used in its construction to the one destroyed.