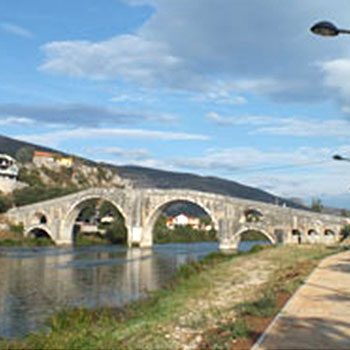 Arslanagić Bridge was erected in 1574 by the order of Grand Vizier Mehmed Pasha Sokolovic as an endowment to his son who fell in battle with Venetians during the Ottoman occupation. When the Turks were suppressed from Herceg Novi in 1687, many Turkish families from this town moved to Trebinje. Among them was an Arsnalaga. Country estates eastward of Trebinje: Zupci, Necvijeće and Jasen entered into his possession, and he was entitled to collect bridge-toll when crossing the bridge on the Trebišnjica.

The bridge named after him has been referred to as Arslanagić Bridge ever since then. When hydroelectric facilities were built on the Trebišnjica River the bridge was flooded in 1965. At the request of the Institute for Protection of Monuments the bridge was then dissembled and transported downriver in 1966 when emptying the artificial body of water. A new location of Arslanagić Bridge stands between settlement Gradina (on the right riverbank) and settlement Police (on the left riverbank). Since 1993, the bridge has been referred to as Perović Bridge.