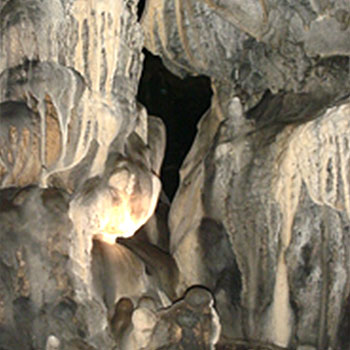 Yet another prehistoric site, located 2 km from the St Peter and Paul’s monastery, is Paul’s cave, rich in cave ornaments. The massive formations of cave columns of large calcite crystals dominate inside it. There is a number of legends about the cave, thus giving it a special significance. According to ancient tradition, St Apostle Paul came to this cave and hence the name. Hiding from the Roman authorities, he christened people in the cave. Traditionally, every year, on St Peter’s Day, a large number of believers gather together with a priest who helds a divine liturgy inside it. The cave has a stone altar and the icon of the Apostle Paul. The cave itself consists of several halls richly decorated with stalactites and stalagmites. Inside the cave there is a small lake associated with the belief that maidens who wash their face with the water in the lake on St. Peter’s Day would be beautiful and attractive. It is also believed that the water is healing.

Monument to Njegoš, the first in the world, was raised in Trebinje in 1934. It was designed by architect Brašovan, while a statue is the piece of sculptor Toma Rosandić. Opposite Njegoš monument, there is a monument to Jovan Dučić, with the statues of lions at the entrance to the town park, as well as the figure of Helen of Anjou in the old town walls, presented by Dučić to his hometown. In the center of town there are monuments from the First and Second World War, and the Monument to the Defenders of Trebinje 1991-1996.