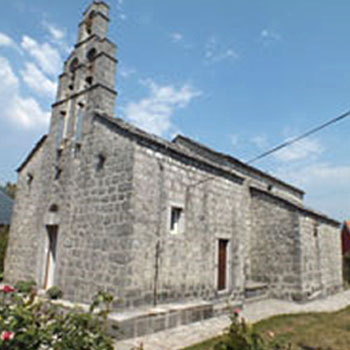 One of the most outstanding examples of cultural and historical monuments is definitely Dobrićevo monastery. It is believed that the monastery dates back to the 13th century. There is a legend saying that the monastery was built by the Emperor Constantine and Empress Helena upon their return from Rome. While staying in this place and resting they put it like this: “It was good,” and the monastery was named after it. The cross-shaped church was constructed in Byzantine style and is dedicated to the glory of the Entry into the Temple of the Most Holy Mother of God. In its history, the monastery burnt in a fire thrice.

First time it was in 1694, the second time during the First World War, and the third time during the Second World War. The monastery, as well as all other edificies around it were not returned to its original place. During the construction of the Hydro Electical Power Plant on the Trebišnjica River, the monstery was in danger to be found under water. In 1959, the National Institute for Protection of Cultural Monuments establihed a committee, which considered the issue of salvage of Dobrićevo monastery. It was concluded that the monastery should be relocated somewhere else. Before its moving to a new location, the monastery was situated on a hill on the right bank of the river Trebišnjica, on the border between Herzegovina and Montenegro. New Dobrićevo is 10 km from Bileca, and about 20 km from Trebinje.