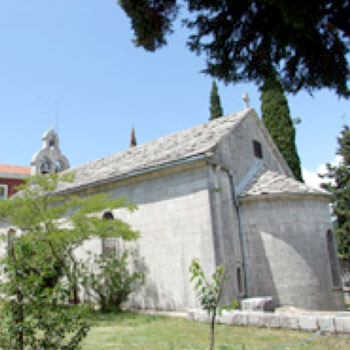 Duži Monastery (16th century) is dedicated to the Shroud of the Most Holy Mother of God. It lies on the left riverbank, some 10 kilometers downriver from Trebinje. In the 16th and 17th century it was the property of Tvrdoš monastery. When Tvrdoš was devastated, the metropolitan and monks moved to Duži in 1695, restored and expanded the church and its property. Thereafter, it bore the name of Duzi and still has been known by the same name. Until the abolition of Peć Patriarchy in 1776, the residence of the Metropolitan of Herzegovina was there. The monastery suffered considerable damage on several occasions – plundered and devastated. However, it owns valuable handwritten church books, even Russian editions from Moscow and Kiev. The fragment of the Honourable Cross is found in Duži monastery.