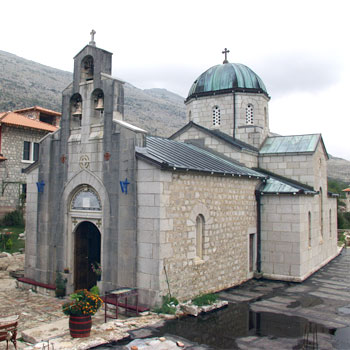 Tvrdoš Monastery (4th – 6th century), 4.5 km from Trebinje on the road heading to Mostar, was built on the foundations of the old church. It has existed continuously since the late Antiquity (4th – 6th century), although repeatedly destroyed and restored. The monastery was severely damaged in 1694 in battles between Venetians and Turks when the entire treasury of the monastery was moved to Savina Monastery near Herceg Novi, where it still remains. In the early 16th century the monastery was frescopainted by Dubrovnik’s icon-painter Vicko Lovrov and a monk Marko Stefanov from Trebinje. In the first half of the 16th century Tvrdoš monastery was the greatest scriptorium in Slovene south, at the same time being the cultural and spiritual hub of the wider region.